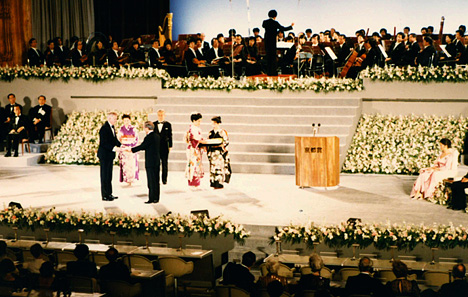 It was through the help and support of people that Kazuo Inamori overcame his childhood illnesses, received a university education, and found employment. These early experiences made Inamori aware of his own vulnerability from a young age, prompting him to think deeply about the essence of human nature and to question how we really ought to lead our lives.

The years following the establishment of Kyocera Corporation in 1959 brought a new set of trials to Inamori as a corporate manager. While these hardships caused him considerable confusion and distress, they likewise served to reinforce his personal quest for the most meaningful path in life. He gradually arrived at the conclusion that a human being has no higher calling than to strive for greater good of humanity and the world, a tenet he committed to aspire to for the rest of his life.

By this time, Inamori himself had been the recipient of awards from various groups and organizations. Such recognition served as the inspiration for how to put into practice his lifelong conviction that our highest calling as human beings is to work for the greater good of mankind and society. In 1984, he founded the Inamori Foundation and endowed it with approximately 20 billion yen of his personal funds. The Foundation began its operations the following year.

In the founder’s own words, “It is my sincere hope that the activities of the Foundation contribute to the progress and development of humankind and thereby allow me to repay, in some way, my indebtedness to all those in my local community, in my country, and throughout the world who have helped make me and my company what they are today. “