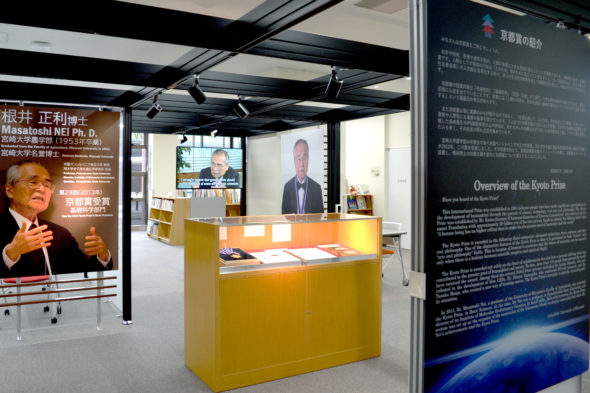 Dr. Nei, an evolutionary biologist, proposed what is now called “Nei’s Genetic Distance,” which quantifies differences in the vestiges of evolution that remain within proteins and DNA in his 1972 paper. This innovative idea has made it possible to estimate how long ago different biological populations branched off from common ancestors. It was this achievement that first brought him widespread international recognition.

Dr. Nei graduated from the Faculty of Agriculture at the University of Miyazaki in 1953 and was awarded an Honorary Doctoral Degree from the same University in 2002.

The new exhibition space honoring Dr. Nei opened on the first floor of the renovated University of Miyazaki Library on July 15, 2020. The space is open to the public and visitors can find the collection featuring his reception of the Kyoto Prize including the interview video and other related materials.